The 3 Are Finished in Clay and Ready to Cast

As a fine artist telling people the “back story” of a painting or sculpture is as enjoyable as creating the work. It enables me to share my thought processes, research and maybe even a bit of my soul. People may not agree with my end product but by telling the story of the piece they come away more knowledgeable and less intimidated.

First was the question of what type of woman was she?

She was the woman left behind as her husband went to war; to raise the family, work the farm, run the store, teach children, be the politician at social events, work in the shops, be the lady of the house, make the decisions to keep a roof over her family’s head and food on the table. She was capable, hardworking and proud.

How did she participate in the war effort?

She participated by boycotting British goods, producing goods for soldiers, spying on the British, and serving in the armed forces disguised as men, served on the battlefield as nurses, water bearers, cooks, launderers and saboteurs.

I looked at paintings, read journals and books on the fashions of the time from 1770-1790. She dressed depending on her station in life. They all wore the same basic articles of clothing, but it was about the quality, fashion, and materials. Her gown could have been wool or cotton or silk, and her undergarments were linen.

The question was who was the Woman Patriot in my mind?

I had the image of a woman who was not the farm girl, but slightly better dressed and who could be a camp follower and yet pass herself off as a educated lady when it became necessary. Not a socialite but working class like a teacher or shop keeper.

She is wearing a typical fitted long full dress and an over skirt with a tight waist, 3/4 length sleeves and a shawl over her shoulders. Her cap is a cloth cap that covers the top of her head and ties so that the edges scallop. In her left hand she carries a basket of vegetables or flowers.

Through my research, I found a lady that was the persona I wanted.

This then is the back story of the Woman Patriot and why I have created her as I did.

The Black soldier of the 1st Rhode Island Regiment.

Interestingly enough, the uniform for this regiment consists of white overalls (pants with gaiters attached), a white shirt and black neck sock, white vest and a short white rifleman coat with small fringe.
His cover (or hat), is very unique to them. The front panel is teardrop shaped, black with white piping and a white anchor on the face. Behind the face panel they have red and black feathers.
Along with this uniform, they also carry a canteen and a cartridge bag slung across their chest that hang to the back.

I contacted the Oneida Indian Nation asking for what they consider the clothing of the Oneida warrior during the American Revolutionary War. They were very gracious by responding with not only an illustration of the warrior, but also a story about their partnership with the Patriots. This story will be engraved into the red granite Memorial walls (see below colored text).
Long pants, probably deerskin, and around the knees wool garters tied to hand down the outside of the leg, a loincloth over the top. On top of that is a patterned long sleeved cloth shirt tied at the waist with a wide woolen sash. Around the arms are silver armbands and they have a lot of silver bracelets.
Around his neck is a silver gorget and he has earrings that are  two round discs tied together. His face is not painted. The top of his head has a painted skull cap, they would have worn red paint during an attack and black during defensive action. He is bald except for a back circle of hair where he adds feathers that stick up.
I have deleted the red and blue blanket over his left shoulder and over the arm. He is carrying a short barrelled rifle and a very distinctly shaped tomahawk.

The Oneida Indian Nation’s legacy of supporting the United States military dates back to the Revolutionary War, when Oneidas fought alongside the colonists in the battle against the British. Having fought valiantly in several key battles of the American War for Independence including the battles of Oriskany, and Saratoga, the Oneida Indian Nation, the only member of the Six Nation Haudenosaunee Confederacy to side with the Americans, became known as the United State’s first allies.

Since the American Revolution, Oneidas have fought in every American military conflict, memorializing their longstanding support, friendship and reverence for the United States and the values it holds.

Posted by ORWMemorial at 3:51 PM No comments:

Now it is starting to take on the right attitude I am looking for.

Time to work on the face and hat a bit more and some of the rifle and pants details.

Posted by ORWMemorial at 1:24 PM No comments:

And Now the Black Soldier of the 1st Rhode Island Regiment 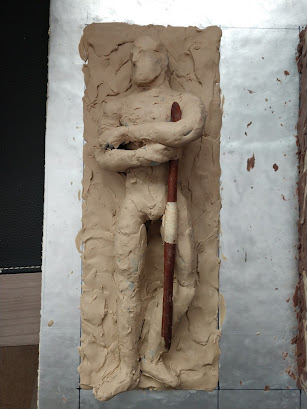 The beginning of the last of the six figures.

The Black soldier of the 1st Rhode Island Regiment.
Like the others, it all starts with the figure that goes under the clothes. On this one, I ran out of dowel to use as the base of the rifle, so I have one of my tools as a stand in prop.
In the next photo below I have started to add the personality of the figure with the face and a rough rendition of a uniform.
Interestingly enough, the uniform for this regiment consists of white overalls (pants with gaiters attached), a white shirt and black neck sock, white vest and a short white rifleman coat with small fringe.
His cover (or hat), is very unique to them. The front panel is 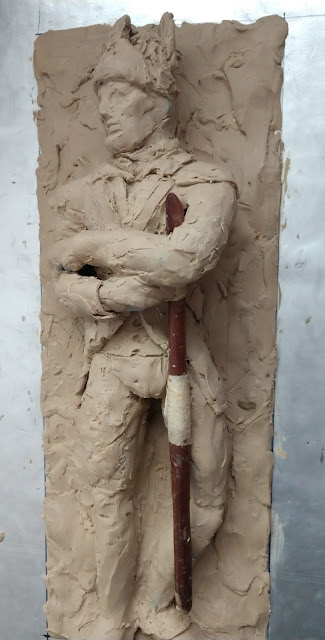 teardrop shaped, black with white piping and a white anchor on the face. Behind the face panel they have red and black feathers.
Along with this uniform, they also carry a canteen and a cartridge bag slung across their chest that hang to the back.
Posted by ORWMemorial at 12:16 PM No comments:

Here is where I am today on this warrior.

I need to do a bit more detail work on rifle, and maybe take off the blanket he is wearing. It is a nice addition to soften up the piece a bit and add an air of royalty, but in battle he would not wear it.

Something to think about. 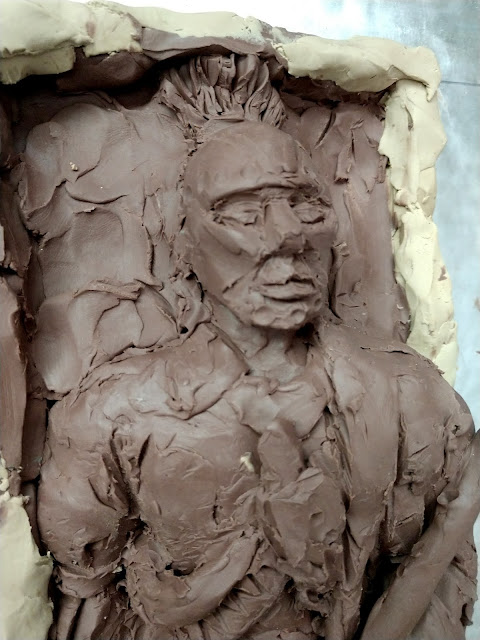 Posted by ORWMemorial at 12:07 PM No comments:

Major discussions were concerning fundraising and restructuring of the ORWM Committee.

Two new members were added to the Committee– Joel Simmons and Craig Keller.
Posted by ORWMemorial at 12:50 PM No comments: